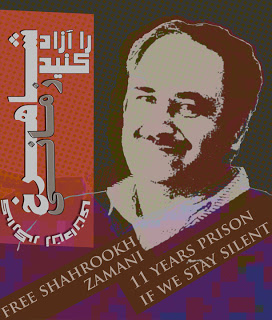 A statement by imprisoned worker, Shahrokh Zamani, to all workers' unions and syndicates in Egypt, Tunisia, Russia, Japan and other Asian countries

It is with great pleasure that I and other jailed labor activists in hellish prisons of Islamic Republic of Iran extend our warm greetings to you. I, Shahrokh Zamani, a member of the Follow-Up Committee to Set Up Free Labor Organizations in Iran and one of the founders of Painters’ Union of Tehran, accompanied tens of other jailed Labor activists have been subjected to severe torture and cruelty in redoubtable Islamic Republic prisons, and we have sentenced to heavy prison terms only for defending the legal rights of working class, such as the right of making workers' unions, and the right to protest and strike.
This government brutally represses the most obvious rights of workers in to safeguard interests of a few number of military and cleric billionaires and to facilitate exploitation of the 50 millions family of working class as slaves. We can mention the full-scale repression of all committees, constituencies, associations and independent workers' organizations such as Syndicate of Workers of Tehran and Suburbs Bus Company, Haft Tapeh Sugar Cane Workers' Syndicate, Saghez Bakers Syndicate, Coordinating Committee to Help Form Workers' Organisation, Follow-Up Committee to Set Up Free Labour Organizations in , etc.
Increasing rightlessness of workers including the one quarter of the poverty line wages; privatization of public sectors, education and healthcare; the lack of job security through expanding the open and temporary contracts in favor of capitalists and against the interests of workers; high unemployment rates and a general lack of social security; the labor law which reflects clearly and overtly the class interests of the employers with no protection against dismissal, assurances against unemployment, the safety insurance and benefits to the workers; paving the way for importing the various shoddy foreign goods by the government's relatives through non-application of the customs tariff law to destroy Iran's industries and productions; wide-spread dismissals and suffocating the workers' struggle in work places by governmental spies and finks, factories and offices' Basij and Workers' House appointees; destroying all production, contribution and consumption cooperatives by governmental Mafia's gangs, suppression of any kind of protest especially in oil industry and the car-making industry as Iran Khodro and Saipa.

Islamic government of is decisively the copartner of imperialist multinational enterprises and transnational corporations to apply the World Bank and IMF's policies and economic plans. On the contrary of this growing, organized and suppressive approach of global capitalist class, the working class in Iran as a militant battalion of workers' army in all around the world, shall be aware of its common purposes with other part of the global working class, and so as to reach its aims, must set up the Workers' United Front based on political and economic demands of working class to equip themselves against Capitalism attacks.

Islamic regime as a member of ILO does not care about the labor standards approved by this organization, agreements nor adapted resolutions to show its complaisance to the global capitalist system. Islamic government even violates its own Labor Law and Article 26 of the Constitution which says " The formation of parties, societies, political or professional associations, as well as religious societies, whether Islamic or pertaining to one of the recognized religious minorities, is permitted provided they do not violate the principles of independence, freedom, national unity, the criteria of Islam, or the basis of the Islamic Republic". This capitalist government represses all demands, protests and workers' organizations and sentences the detainee labor activists without any attorney and self-defense right, by non-independent judges under the control of hellish Ministry of Intelligence and National Security.
I and my fellows have sentenced to long-standing imprisonments: I, Shahrokh Zamani to 11 years, Rasould Bodaghi a member of the Iran Teachers’ Trade Association (ITTA) to 6 years, Behnam(As'ad) Ebrahimzadeh a children's rights and labor rights activist to 5 years, Reza Shahabi a bus driver, Executive Board member and Treasurer of the Syndicate of Workers of Tehran Vahed Bus Company to 6 years and Mohammad Jarrahi a member of the Follow-Up Committee to Set Up Free Labor Organizations in Iran to 5 years imprisonment. The Islamic government attempts to prevent the working class in to be organized through holding the labor activists in prisons and under the persecution, and also puts them under the pressures in out of prisons through prosecutions and dismissals. In such disorganized and isolated situation, workers live in hunger, unemployment and high rate of exploitation and they would be more dominated and subjugated to produce more and more wealth for capitalists.
We the imprisoned workers in , ask all the domestic and international workers' organizations especially in Middle Eastern and Asian countries to be more allied in their struggles against all anti-workers government and particularly Islamic Republic of Iran. We demand your support and solidarity with workers in for increasing the pressures on Islamic Republic and reinforcing the united battle of workers in .

Unity and Organizing are the only solutions!
Workers of the world Unite!